Sorry about the weird emails and Facebook updates… I’m in the process of transferring the site and possibly redesigning.  Thank you for your patience, I have a HUGE list of more stories to add, just trying to find the time to do so. 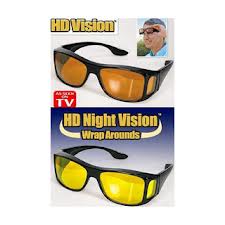 I got my mom these HD Night Vision Glasses a while back as a joke.  I think it was after she was driving my sisters and I down to Gig Harbor one rainy night and we almost died.  She’s a baaad night driver.  Especially in the rain. Especially when I’m in the car. She says I make her nervous.

Anyway, I forgot about the glasses.  The other day she asked me where I got them.  “I think it was at Bartell’s. Wait…  WHYYYYY?”.  I couldn’t imagine why she would want to know.  These glasses are the weirdest looking things.

“I LOVE MY GLASSES.  I wear them every night on the way home from Maple Valley.”  She said.  “I’ve been raving about them in my Weight Watchers meetings and everyone keeps asking me where I got them.”  I can just imagine her driving down the road now, in her silver 2004 Ford Taurus, the one with the matte grey patch on the back bumper, with those stupid yellow glasses covering half of her face.  At night.

Now there’s gonna be hundreds of ladies leaving Weight Watchers in the Seattle area with yellow shades on.  I feel responsible for this trend, and I’m sorry.

Posted in Miss Understood, She says | Leave a comment

uke, mom and I were getting lunch the other day. Duke looks over at me then says, “mom, I’ve been wanting to tell you this for quite a while now but I’m afraid at what you’ll say….”. He paused then said, “I’m gay.” We sat there silent for a while, letting it sink in, and I had to turn my head away so she wouldn’t see my face wincing.  She just sat there for a minute, giggled a little bit, looked at our blank faces and says “Katie, did you know this?” I told her I’ve known for a while, then she says, “Duke, I don’t know if I can believe you or not, but know I’ll love you no matter what”. We had her convinced for a few hours that he really was gay, and every now and again I see her looking at him like she’s trying to figure him out.

My friend had a life sized, very realistic dummy that we used for all sorts of things.  He had a beard, and we dressed it in all black, with a black beanie and put him in

Kimberly’s bathroom. He was up against the wall so when she walked in she wouldn’t see him at first and he looked like he was hiding.  She came home, and didn’t go in her room for quite a while.  We waited and waited.  I tried everything to get her to go in there, but she didn’t bite the bait.  Finally I told her I needed an Advil or something, and that I didn’t know where it was.  She went to go get it. We sat in the family room and we heard a high pitched, but not very loud “who is that?”.  It got louder “who is that!?”. She ran out of her room and out the front door.  She repeated over and over, “Who is that!? What do you want?” very high pitched but not too loud.  We were all laughing so hard, and she still didn’t get it.  We had to bring out the dummy and show her before she’d come back in.

You betta Belize it

Mom, Whitney and I in 2004 went on a cruise in the Caribbean. I talked her into going, I had to have someone over 25 in the room with us.  It was fun.  We locked her in the small bathroom a couple times.  Cruise cabin bathrooms are teeen

cy.  I rigged the shower head so that when she turned it on it sprayed all over the bathroom, “It was out of control… I couldn’t catch it, it was spraying all around like a snake”.  We could hear her shriek and knock up against the walls.  “I got ta

ngled in the curtain and it was sticking to me”. Water was spraying out from under the door, and the place was a mess.
I brought along my walkie-talkies so we could keep in touch.  Mom didn’t reall

y get how to use them. She couldn’t turn the volume down, or be on the right channel, so it was a good opportunity to see what I could get her to do. When we were out at a port, in a busy shopping area, I wandered off and watched my mom from far away.  When she was talking to vendors, or other cruise-goers, I would make embarrassing noises and say “excuse me” loudly in my walkie.  She didn’t know how to make it stop.  She would try to explain that it was her kids, but it just made it look worse. 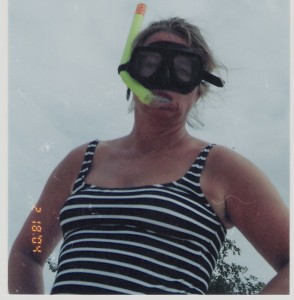 Then, I would listen to other channels to see what other cruise passengers were using, then change mom’s to that channel.  She ended up talking to two little kids, thinking they were me and Whitney, and they thought she was their mom.  She told them to meet them on deck immediately.  When their real mom found out, she wasn’t too happy about it.  Oh Kimberly! 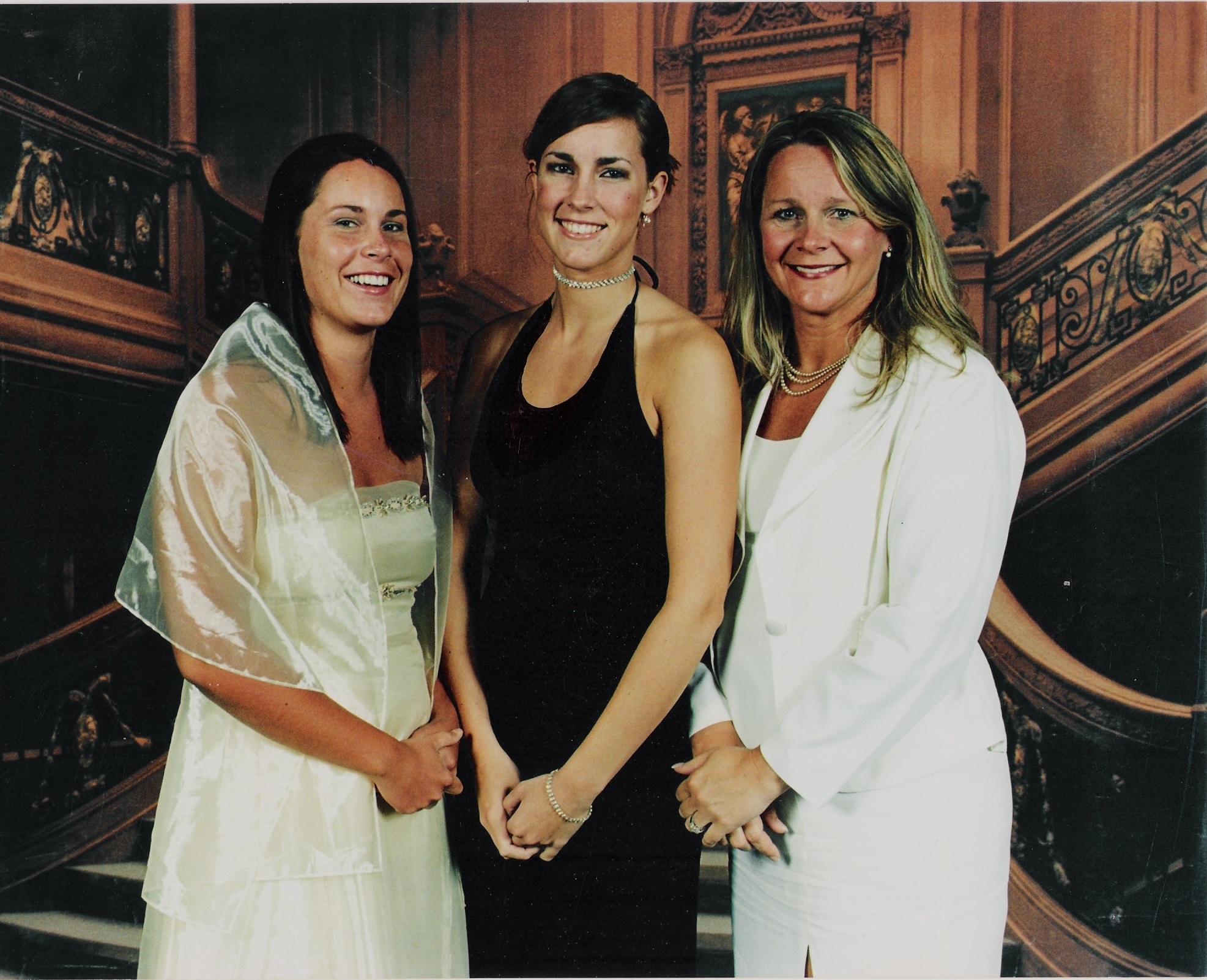 PS. Look at Whitney’s dress…. mom colored in her cleavage with a Sharpie because it was too scandalous!  All of the pictures with this dress mom has destroyed or colored in.  My dress was Whitney’s modest homecoming dress.

So mom asked today “What’s the name of that Beyonce song about singlets?” This was after we had just been talking about how flattering the men’s track team singlets were. 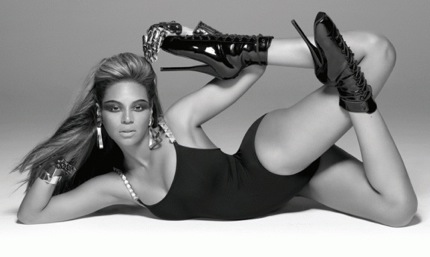 So there’s that and then there’s a family saying, not sure how it started, but we say “I don’t think you’re ready, pass the spaghetti”.  We’re really funny.

Put a Sticker on It

My Dad was always on Mom’s back about babying us kids. She worried too much, and she needed to let the kids be kids.  Whitney came running into the house one day crying and holding her arm.  Someone had pushed her off a wagon and she had a red bump on her arm. Mom went to the phone to call dad, but hesitated and feared she would get another lecture.  She told Whitney she could lay on her bed and “Don’t worry, we’ll put a sticker over the bump and it will feel all better”.  Whitney whimpered for the next 4-5 hours, and mom let her be.  Dad came home and asked Mom how the day went, she said it was good, nothing out of the normal.  He went to his room, saw Whitney and came back out and asked what happened.  “Someone pushed her off the wagon, she started crying so I put a sticker on it.” she said.  “Kimberly, it’s broken!  It’s swollen and has a huge bump on it!”.  Sure enough, it was broken, mom felt bad. 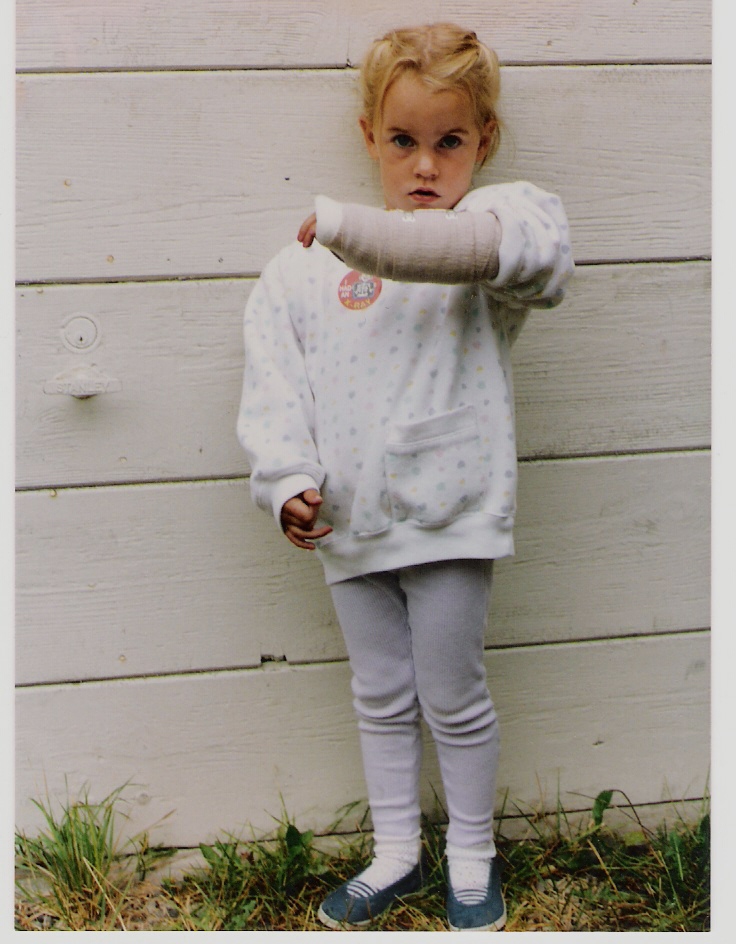 y Grandpa Englund was a fun guy, but reserved and not very touchy feely.  He was sitting in his chair with a group of people and Kimberly was standing behind him.  She started telling a story, getting real into it, and somehow ended up with her hands on Grandpa’s head. Then she started playing with his hair!  Why!? It was sticking straight up and all over th

e place.  She rubbed his head and moved the hair all around, and when her story was done she stopped and realized what she’d been doing.  Luckily grandpa always carried a comb with him to keep it slicked back and tidy, and he combed it back down.  Mom apologized and walked out of the room embarrassed wondering what the heck was she thinking.

Mom asked the other day what song I would want to play when I walked in the room…I don’t know.  She said “Brick House” has always spoke to her and she thinks it would be perfect for her theme song.  I caught her dancing to it with Kinect, and I think she’s totally right.  She’s really connects with it, and it fits her so well.

Yes, that is Duke singing in the background.

Posted in Fan Favorites, Oops!, She says | Leave a comment

Mom was in the car with the boys and their neighbor friend.  They were probably 12-14 years old.  Chris, the neighbor friend, was sitting up front next to Kim and was talking to the boys about something.  Kim wasn’t really listening until she heard him say “F*** it”.  She swung her arm and smacked him hard in the chest.  He was confused… “what was that for!?” the boys in the back yelled. It turns out he said “bucket” not “F*** it”.

Oops!  Luckily his parents never heard about this.